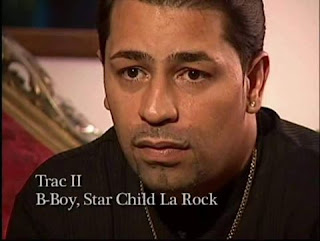 The fiercest challenges began around 1977-78, and most occurred at the Dungeon.The Dungeon was our version of Studio 54. An area used as a local, created renovating the basement of an abandoned palace. We had meeting places so we created them to us! It was a real local ballroom, strobe lights and colored spotlights. The first challenge of its crew came to the dungeon in 1978, the year of the most important battles, the ones that created the standard for the evolution of Bboying.

The battle between Starchild Larock, the best crew of the East Bronx, and Crazy Crew Commander, the best of the west, was memorable. Of mutual friends, Dave and Tony, who lived in the same project of the members of the DC Crew, instigated the challenge of turning the rivalry between the two crew. So in early July 1978, Spy, the man of athousand moves, and Shorty challenged Buzz and myself at a party at PS118, between Lafontaine and Lasalle Av, 170esima on the road. Charlie Chase was the dishes. There was no real winner, Bboy competition were among the best in the scene. The verdict is not clear accendese further rivalry.
For about two months, the hatred between the two crew was at the highest levels. This weather lasted from July to November of 1978, when a friend of DJ Charlie Chase rented a hall in Crotona Av for organizing a contest of the most popular dances: the hustling and the sauce. Last when he decided to include the bboying. For this contest will be presented Starchild La Rock, The Bronx Boys, Crazy Crew Commander, Rockwell Association, The Disco Kids, and all the crew of the area. I still have the trophy prominently in your living room!
Given the highly competitive nature of the dance, which exist only if you can stand out, it was not long before the Bboy aggiungessero to their repertoire also close to the ground as the footwork and freeze. From top-rocking and Uprocking, the Dance has moved to the ground. Elaborate games were introduced in the legs, then freeze, and then were mixed with elements of the top-floor-rocking and rocking.The style has evolved rapidly in search of the moves were to be shown next to the party.
Thirty years since those days in the Bronx, from C2 emphasizes that the story I tell is not just the story of the crew or the history of Starchild LaRock Trac 2, but also to Vinny, Bobby, Spy, Shorty, Batch and Aby, the Zulu kings, the Salsoul and TDK. This is the story of Bboying.1978 was the year that created the core of this dance. Footwork that is even today is that the DC Crew, the Shuffle is the Salsoul crew.
The full interview with from C2 is included in my latest book, Renegades of Funk.
Posted by SOLO138 at 12:24 PM
Email ThisBlogThis!Share to TwitterShare to FacebookShare to Pinterest