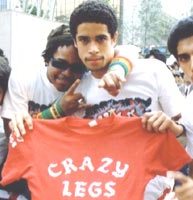 T.B.B will always have a special place in my heart, because it was Batch that made a brother feel like he was part of something as a shorty in the Bronx. It was the first time that I was in a crew and it was a sincere honor to have that opportunity to say that I was a member. Shout out to my cousin Lenny Len for bringing me in to the whole game and creating the situations for me to meet the T.B.B family in the 70's. When I first heard about T.B.B is was like a Puerto Rican Zulu Nation and I was immediately drawn to them. So it meant more then just being a b-boy in a crew. It was probably the beginning of me being on a path towards understanding what is was to be a Bronx Puerto Rican. I will always be great full for that. And for the record and fair props, it was Afrika Bambaataa that challenged me to consider going beyond the surface of my Boricua roots. So thanks to him as well. So for all of you out there that question or are looking at me sideways? Let me make it clear. My first crew was T.B.B and I will always be proud of that. So I wish all of you a great weekend and a great celebration. Shout out to Aby Tbb and much respect to Batch and the rest of the people that made me feel good about that part of my history. - Crazy Legs


What was your first experience with breaking?
My personal first experience B-Boying was watching Afrika Islam dance with my brother in front of 1661 Garfield Street, in The Bronx, which is where we lived. The year was 1976, I was around 10 years old, and I was standing on my stoop. They were comparing moves, and I remember clearly what was going on in my head. It was a feeling of deep embarrassment, because I couldn’t understand why my brother was throwing himself down on the floor.
My next experience was a year later, it was the summer of the blackout of 1977, Son of Sam, the Yankees won The World Series, all these great things were going on that year and my cousin, Lenny Len, took me to my first jam. We’re still talking about a time prior to everything that was happening that came to be called Hip Hop. The word didn’t exist, it just was used to describe an action, an action of partying. People would say, “hip hop y’all, and ya don’t stop, rock rock y’all, and ya don’t quit.”
It really could have just as easily turned out be the Rock Rock culture. It could have been anything that described the atmosphere of the party and social dancing. And so my cousin brought me to a jam, and there was everyone there: B-Boys, B-Girls, writers, MCs, a mixed group of blacks and Puerto Ricans. The energy of what was going on there blew me away. I felt like, “I want to do this!” I fell in love with the environment first, before the dance. I fell in love with what eventually became Hip Hop for what it was, for how it existed.
And that was it, you were hooked?
I started breaking the day I saw it at that jam with my cousin. I had been over at my grandfather’s house in Brooklyn for a couple of weeks for a mini-vacation, it was when the blackout happened, then I came back to The Bronx and Lenny was like, “you you gotta come to the jam!”
Who were the real first crews?
You had many crews from different areas. There were The Bronx Boys, who were like a Puerto Rican Zulu Nation. They were the first crew I was down with, and they had some of the best breakers at the time. Jimmy Dee and Jimmy Lee, who were the founders of Rock Steady, were also a part of The Bronx Boys. They actually created Rock Steady as the result of everyone going out one night, tagging up, but they wanted to go break. So the next day they decided they wanted to form another crew, but still be backup for TBB. They got their blessings from the leader of TBB and so Rock Steady was born. So you see, they were called the B-Boys, or The Bronx Boys. It was a term for an individual, as well as becoming a crew. And when you tie in the dance, it all works together, but then expanded. But the term breakdance itself never existed then.
So while you have inspired generations of B-Boys, who was your idol as you became one?
There was a B-Boy that we all wanted to be like, and that was B-Boy Spy. Out of that group of the first B-Boys, he was the ultimate. If you weren’t trying to be like Spy, you were just trying to get better so you could try and be like Spy. He was born in Puerto Rico but raised in NYC. His nickname was “The Man with A Thousand Moves,” need I say more? But it wasn’t that he had 1,000 moves, he was creative, he would create concepts and do footwork and then roll over on his back, and on his way up he’d make believe he was filming you on an old-school camera.
And he would do moves in both directions, which creates the illusion that he has double the moves. It would extend his run and make it look like he was doing so much more. He was the one who created the six step. That in itself, you don’t do footwork without emulating Spy somehow. I think I owe it to Spy. Today, he’s in jail.
- Crazy Legs
Posted by SOLO138 at 9:29 AM
Email ThisBlogThis!Share to TwitterShare to FacebookShare to Pinterest