Dot-a-Rock Rest In Peace
One of my favorite M.C.s of all time.
Your Amazon rhyme was one of my all time favorites.
God Bless you and your whole family
You Fantastic M.C.
The Iceman. 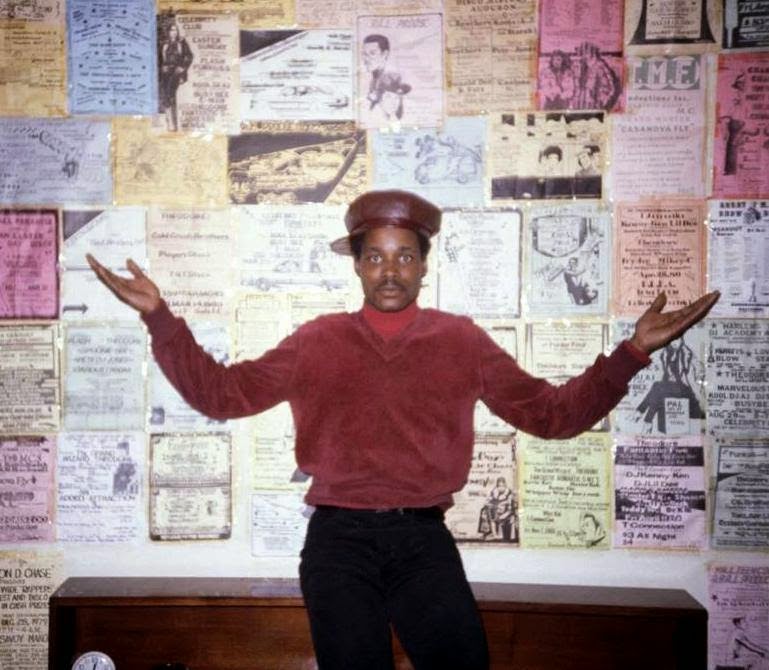 Troy L.- Where did your name Dota- Rock come from?
Dota- Rock- The name came from a candy called Mason Dots. They were like ju ju fruits.

My last name is Mason so I took the name Dot. I originally started out as Dottie Dot, I wanted to get more raw so I went Dota Rock!


Troy L.- Who inspired you to want to M.C.?
Dota- Rock- M.C. Geronimo of the crew called Chaos from up in Edeamore projects here in the Bronx. That was 1974.
Troy L.- Who was the first D.J. you heard?
Dota Rock- Breakout, He was known back then for having a lot of plates. Then came Flash.
Troy L.- How did you and Whip, Caz and J.D.L. meet?
Dota Rock- Whip and Caz was coming through my projects the Twin Parks.
They had with them there school brief cases with thier names written on the side and a Radio that we called a Box back in the days, one of them joints with 2 mics on the sides. they started rocking the crowd by just playing one of there tapes. That’s how we got cool. We ended up all going to Roosevelt H.S.. I met J.D.L. going for try outs to be with the Mighty Force. So I was on my way to D.J. A1 Mighty Mike’s house for the try outs. The way me and the L. met was he too was looking for the same house. So we walked past each other twice until he walked up and asked me were the building was at that he was looking for. When he told me the address I started laughing he did also when he realized that it was the same address. So we went up the same time and made the crew the same time.
Troy L.- Who were the players in the Mighty Force?
Dota Rock- Me, Whip, Caz, R.C. and J.D.L. and the D.J.s were Caz, Mike Swat and A1 Mighty Mike. Big Bank Hank (before Sugar hill gang) was our manager. Back in those days there really wasn’t any routines just rocking on the mic saying your lyrics. One night we were supposed to battle the L-Brothers at the Audubon but our system broke down on us. Me and Whip stayed there about 2 years and broke out.
Troy L.- Where did you and Whip go to next?
Dota Rock- We went to the Cold Crush next. It was Chase, A.D. and Mr. Tee. We went to the Crush cause they had a better system and did better party’s which meant better money. We also had contracts that said we did not have to carry equipment any more. We left them after 2 years. While with the Crush we would do parties with the L. Brothers, and me and Whip were on top of our game so we use to kill parties that the L. Brothers were at. So they approached us and asked if we would like to be down. Man they were doing better shows so you know that meant better money. 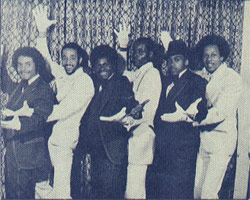 We went from 2 dollars a man with the Mighty Force, thats because parties were costing a buck back then, to $20 a man with the Cold Crush. Then $100 a man with the L-Brothers and Fantastic. First we ran with the L-Brothers that consist of Mean Jean, Claudio and D.J.A1 Mighty Mike and me and Whip. Theodore by now was doing his own thing with him, Kevie Kev, Master Rob and Busy Bee. Now Ruby Dee lived in the same building with Busy Bee so that’s how he got the juice to be down with Fantastic later. Which was soon because Busy and Kev use to argue a lot and that started back from them growing up together from little boys. So Busy Bee chose to step out on his own and that’s how Ruby got on. Even when Busy went solo he would still come back to rock with us. Then it didn’t take long before we combined with them and became the Fantastic Romantic 5 M.C.s


Troy L.- How would you describe each M.C. of the crew?
Dota Rock- Kevie Kev was the captain and lady’s man. Master Rob, Kev’s brother was the baritone smooth talker. Me I was the story teller, with fast rhymes. Whip was off the top of his head going with the flow as well as a story teller. Ruby Dee was just the most skilled Puerto Rican M.C. as well as the most well known. Kev also collected the money and had a pretty good knuckle game so we never had a manager but we kept our guns right up on the stage with us.
Troy L.- What about the back up to Theodore, Kevie Kev Rockwell?
Dota Rock- Kevie Kev was the backup but very important to us! He would set up all the records for Theodore while he was D.J.ing. Also he warmed up the crowd as well as the equipment before the actually show. Being as Theodore was serious about this, it was hard for Rockwell to get light because Theodore would be at every show just about.
Troy L.- Was there a time when the Fantastic 5 was suppose to battle the Crash Crew?
Dota-Rock- Yes. We did some shows with them and at the time thier record High Powered Rap was out and they played it at every show we did with them. Being as the record was good, doing good they thought they were hotter then us. One night we had a few words with Darrell C and I think G- Man. So we set a date to battle them but they did not show. I guess they knew we were ready to tear ass! We did battle some kids from Yonkers, The Devastating 4 and we tore ass!
Troy L.- What started the battle between the Fantastic and Cold Crush?
Dota-Rock- 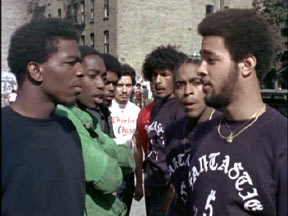 J.D.L. one night was saying they were the best and Busy was like Fantastic could take yall out. So they were riffin’ about that. One day we passed by Caz’s house while they were practicing and they seen us out the window so they came out side and started arguing which turned into a bigger argument. I couldn’t believe it myself because we were all friends. 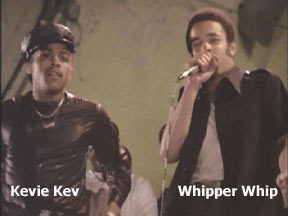 This is also during the time when Kevie Kev came back. Since he did that record called "All night long" it labeled us just right.


Troy L.- How did the Fantastic 5 go about doing your record "Fresh out the Pack"?
Dota-Rock- A gentleman by the name of Johnny Soul talked to us about doing a record on his independent label. He was a decent man and he gave us some good ideas. So we did the record. It sold pretty good here in N.Y. Mr. Soul also had a tour bus for us with our name on the side of it. Mr. Soul died before we could do a second record.
Troy L.- Where did "My mic sound right check one" come from and how did the Fantastic feel about the girls "Salt and Pepper" using it?
Dota-Rock- Kevie Kev made that up. He got tired of saying "one two, one two
checking the mics. We never really got a chance to meet Salt and Pepper but we met Herbie Luv Bug thier manager and producer. He came to one of our shows one day with a bunch of body guards and told us he really admired our music and he was a big Dota- Rock fan. We just looked at him and said thanks and walked away. We really didn’t appreciate him using "my mic sounds right check one" with out permission. That was not the only thing he stole, there were other routines that we wrote he used for the girls.
Troy L.- How did Fantastic get on with the Wild style movie? And what was the pay like?
Dota-Rock- Well we were the hottest group. So Charlie Ahearn and Fab 5 Freddy came to one of our shows and asked us if we would like to be in the movie, we said sure. They paid us $1000 a man each set we did for the movie. That set we did in the basketball courts was at 7:00 in the morning. Us and the Cold Crush did shows that night before the game so we never went to sleep, everyone looks tired. If you look close enough I still have on a collar shirt under my sweat shirt from the night before at the party.
Troy L.- How do you feel about Hip Hop today?
Dota-Rock- Hip Hop is Hip Hop but it’s not Hip Hop from before its more practiced, more gangster, its more record. It’s not enough imagination. I think the gangster took a lot out of Hip Hop. I enjoy some of the records now but that’s all it is records. It’s not an art any more. I hear brothers freestyle and say the same thing like the next man talking about he goin’ to pull out his glock. Blazy blah what he goin’ to do on the block. Any body can do that. But he’s just promoting violence. I don’t see anything party about that. There’s no skill there. If you don’t have a dope beat behind what your saying it don’t mean shit because no one’s going to buy it. The majority of it is gangster and I am getting tired of it I think it is killing Hip Hop. I never talked about killing in my rhymes in fact no one did in those days.
Troy L. Who do you dig today as an M.C.?
Dota-Rock- L.L.Cool J. I like the way he gets on that Gangster but gets right off of it. He’s able to be versatile and has longevity. Even though he breaks out for movies or his show he still comes back and lays down his rhymes good. I checked him from day one I even went to his Raising Hell tours. That’s who I think is a great m.c.
Troy L. Are you finished with Hip Hop? Do you still write?
Dota-Rock- I have always wrote but I took a couple years off to be closer with my family and just chill and collect my thoughts. Now its back on. I am always Dota-Rock but I am Darrell Mason first.
Troy L.- ONE. TROY L. from HARLEM

© 2002 Troy L. Smith No part may be reproduced without authors permission.

Posted by SOLO138 at 7:23 PM
Email ThisBlogThis!Share to TwitterShare to FacebookShare to Pinterest