The Lyrics of Grand Master Caz 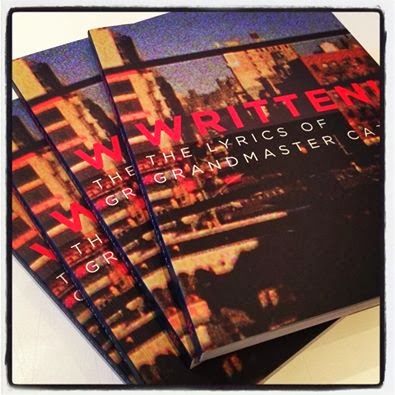 Grandmaster Caz is a pioneering legend who can genuinely be credited as one of the inventors of rap. Caz is perhaps best known as the writer of Big Bang Hank’s rhyme in Rappers Delight. The lyrics were stolen from him and he has never been credited or paid a dollar for writing the words to possibly the most famous rap record ever.
Caz went on to join the legendary Coldcrush Brothers whose party rocking style would greatly influence many of rap’s commercial breakthrough artists.
In 2012 Caz became the unexpected star of Ice-T’s seminal rap movieSomething From Nothing : The Art Of Rap. In the movie Caz receives props from many of the cast, including Ice-T, Rev Run, Rakim and Eminem, who sight him as one of the godfathers of Rap. As a result of the movie Caz’s career is enjoying a significant renaissance. Notable for his extraordinary penmanship Caz’s favourite rhymes are reproduced from his notebooks and published for the first time in this beautiful book.
44 Songs   132pp   245x190mm   Softback

Click to Purchase!
Available to buy on Amazon.com also!


Posted by SOLO138 at 8:03 PM
Email ThisBlogThis!Share to TwitterShare to FacebookShare to Pinterest