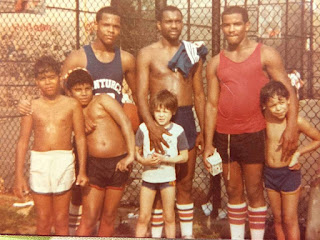 Spy (Crazy Commandos)
B-boy Spy, from the Crazy Commandos Crew, dominated in the art breaking in the mid to late 1970’s. His understanding of the foundation allowed him to evolve and take moves from other b-boys and redesigned them to make them his own. At the same time, he was creating moves that would later be taken by others. But, many could never do it like Spy. Spy was recognized as the creator of moves that serve as major components to what is the foundation of breaking, such as the Six-Step Footwork, the CC Rock, Swipes, the Baby Freeze, and his Latino flavor of top rocking.
His arsenal of moves made it easy for his peers to refer to him as “The Man With A Thousand Moves”. According to Spy’s personal friend and peer, Trac 2 from Star Child La Rock. “Spy was a master illusionist”. With that being said, it is no wonder how Spy could do just about any move in both directions and make it seem as if each time he did them, they appeared to be different moves.
Spy’s partnership with the music showed that in order to rock the floor, you first had to let the music rock your soul. He was the absolute epitome of what a b-boy should be. His influence is such that it served as the blue-print for what has become what a b-boy or b-girl must learn in order to become one. Spy’s influence was the very reason why b-boys such as Crazy Legs and many others wanted to strive and become the best b-boy that they could be. Spy was an idol and a super hero to many b-boys and b-girls in this Hip Hop game before it ever became commercial. He was the first larger than life b-boy and is a true legend among his peers.
(Pictured in the red top) 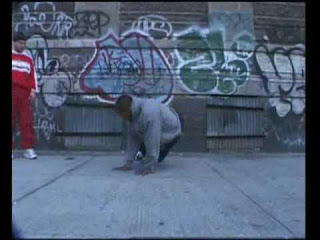 Trace2 - The Bronx Boys on Spy CC Crew the BEST bboy of our generation...EVER! even when he messed up it looked good... i remember one time in the midst of battle..where he did a swipe in the air with such speed that his cap flew off his head. it was a strange sight for us since we never hardly seen him without his hat on. but as he was in the air spinning the cap flew straight up and when he landed in the freeze, the cap fell perfectly on his head...and he continued his set like it never happened...lmao...that was something to see..lol.
Posted by SOLO138 at 6:59 AM
Email ThisBlogThis!Share to TwitterShare to FacebookShare to Pinterest