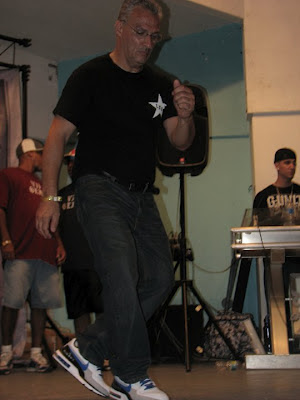 "I grew up in Brooklyn in the 60's... and in 1967 when i seen Rock from a bunch of white boys in East New York It was called Rock!
MC click dudes left their kids with their grandmothers.  And when the grandmothers went to bootleg bingo in Eastern Parkway.. all the kiddies were out there ROCKING .. They learned from their moms and pops listening to Rock... I stopped Rocking in 1974-75 when i was 17 or 18 and went with the disco which was on fire at the time... girls everywhere.. Should have never changed the name ... to me it will always be ROCK!"  -BUSHWICK JOE

When I first started to Rock dance and dig Rock music as far back as 1967 it was always called Rock ... When I first started to learn to Rock dance from Gabriel Sanchez in 1968 May he R.I.P. I learned only Rock dance! In 1969 was when I learned Burn Or Get Burned Rock Dance from watching Sunny Papo who was the leader of the Spanish Eagles gang on Central Avenue and Hancock Street in Bushwick. Once I learn them two components I put them together and was in the streets battling from 1969 till about 1975... I won only one Rock dance contest and it was at the Himalayas in Coney Island in 1972 . And it would be the only Rock contest i would win, because back then Burn Or Get Burned Outlaw Rock was an outlaw street dance that hardly had any Rock contests unless there were tons of outlaw Rockers in one place that got along and that was very rare. The battle cry at Coney Island 1972 I was with Rick Love Chucks Brother and a few other Rockers ..We only danced two whole songs.. Burn Or Get Burned Rock Dance was always a street battle dance never a clubs dance like now, Only in the streets in the parks in the corners in the Gates of your house on the roofs in the basements school yards and especially in outlaw club houses and all just for fun & sometimes recognition as a Rock Burner ...That Night On the J train coming home we ran into the Black Pearls Outlaw crew What a Night Coming home from Coney Island...."

I Went to Halsey Junior High School from 1971 - 1973 I Was always getting provoked to fight then sometimes chased by gangs like the dirty one's, the Devil Rebels, Homocide law, Pure Hells etc. I remember that we played our Raidos when we Played Handball & Rocked "Burn or Get Burned" at the handball courts. I dropped out in 73 and went to st Barbara's church in Bushwick for my GED classes in 1978. I took my GED test at Eli Whitney passed with a 225 in 1979. We had our prom dance at St Barbara's church And as usual "I Was The Dj" as I had been a few other times on Friday nights, Besides I was the only one with the Dj equipment and records that would do it for the fun of it. I had tons of fun "The good old day's in Bushwick".
Bushwick Joe, Bushwick Rockers Brooklyn NYC. 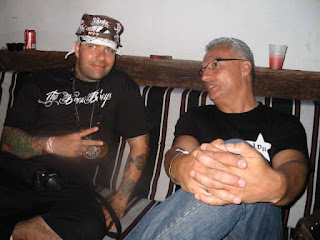 "The only reason I Rocked And Only Rocked Was Because that's all there was. No Bboy, no hustle, no Disco, no poppin, no webo. Strictly Rock!
Nothing else! :).
All them other dances came later. Rock on!"
-Bushwick Joe

Posted by SOLO138 at 1:55 PM
Email ThisBlogThis!Share to TwitterShare to FacebookShare to Pinterest