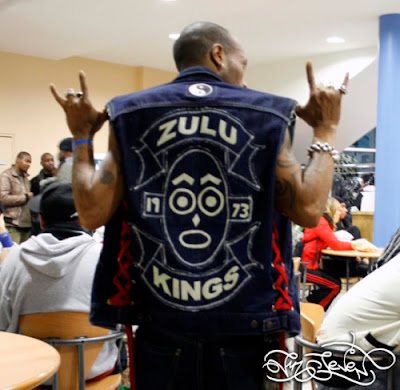 Luis Roberto Martinez Jr., AKA "Alien Ness," is a b-boy who has earned widespread praise from today's up-and-coming b-boys on an international level, all the while maintaining a funky old school style and staying true to the essence of hip-hop. Known for many years as "Kid Ness," a nickname passed down to him by "Mr. Ness" of Grandmaster Flash and the Furious Five back in 1982, when he first started rockin' the dance floor with his fancy footwork and complex aerial moves, most notably, his unearthly elbow spins. Almost immediately, his skills attracted the attention of Dance System 10. He began touring with them; and securing other shows in Japan, and for Carnival Cruise Lines.
"If you ain't doing what (Alien Ness) is doing, you ain't doing nothing." Wyclef Jean Fugees Under the guidance of the late Scott La Rock and KRS One, Alien Ness was an original member of Boogie Down Productions. Shortly thereafter, in 1985, he was recruited as a member of the already established and world-renowned "New York City Breakers." As the years passed on, the name "Kid Ness" faded away, and he was re-named "Alien Ness" by Afrika Bambaatta, the Godfather of hip-hop.
"He's numero uno…The original…b-boy killer." Afrika Bambaattaa Godfather of hip-hop Alien Ness is a multimedia performer with numerous credits. He appeared in the movies "The Last Dragon" and "Krush Groove," working alongside Run-DMC, Kurtis Blow, Fat Boys and Sheila E, and is also one of the key featured dancers in the upcoming film "ALL OUT WAR". Performing in concerts over the last two decades, Alien Ness has rocked with artist that include, LL Cool J, Salt 'n Pepa, Kool DJ Red Alert, Kurtis Blow, Tony Touch, Kid Rock, Cuba Gooding Jr., Public Enemy, Wu-Tang Clan, Black Eye Peas, and the God Father of Hip Hop himself Dj Afrika Bambaataa.
"Alien represents real hip-hop and I am proud to know him. I hope he succeeds in every way." Kurtis Blow Inspired to give something back to his community, Ness has taught dance at community centers throughout New York, notably The Point C.D.C. in the South Bronx, and Henry Street Settlement on the Lower East Side of Manhattan. He has also taught teens in after school program in NYC schools in Queens. He has participated in charitable shows for the Cancer Society and the Wyclef Foundation in Miami Fl. As well as in NYC's carnegie hall, and headlined three showcase benefits for the Blackout Children's Fund, both as dancer and rapper. His insight and experience in the culture of hip-hop earned him invitations to lecture at Yale, Rutgers, New York University, San Francisco State University, Sacramento State University, Seattle's "Experience Music Project", and on BET Teen Summit, and has been a major contributor to countless published books on the history of Hip Hop and its dance culture, leading to the release of his own and highly anticipated book, "THE ART OF BATTLE." ,released by Throwdown Publications UK.

"The quintessential b-boy... you can see it's in his soul." Grandmaster Caz Cold Crush Brothers Bringing his skills to the stage, Alien Ness headlined at the Hip-Hop 3000 tour in Bologna, Italy, co-choreographed and co-starred in the theatrical dance fusion, The Art of Weightlessness which played in Philadelphia, New York City and Paris, France, as well as himself in "Echo Park: The Hip-Hop Musical," which played at the legendary Apollo Theater in Harlem, New York. Alien Ness' superb expertise and honed craft has led him to also choreograph the half time show for the WNBA's Phoenix Mercury Hip-Hop Squad and also participated as an instructor for a yearly dance camp which includes one week of intense training and choreography in Phoenix Az., aswell as in Seattle Wa.. Most rescently Ness has participated at the "STYLE IS KING" dance workshops in Switzerland. Ness has also had 2 succesful "Blueprint Workshop" tours throughout Australia, Asia and Europe, and continues to bring his unique teaching style which have honed some of the best b-boys, to dance schools all across the globe.  "Alien Ness is one of the illest b-boys out there." Grand Wizard Theodore Creator of the "Scratch" Recently, Alien Ness was recruited as a member of the internationally known Rock Steady Crew. He was also a special guest when the rock & Roll Hall of Fame recently honored Rock Steady and the New York City Breakers, as well as performing when the exhibition opened at the Brooklyn Museum of Art. Currently, he can be seen as a featured dancer in the Tony Touch music video, "I Wonder Why (He's The Greatest DJ)." In addition, he co-stars in the most recent MTV-X commercial and has performed with the Rock Steady Crew at Summer Stage in Central Park. Look for Alien Ness in the feature film "Bomb The System" as well as the indipendent film "PROMISE." Ness already has 2 rap records out in Japan with Afrika Bambaataa for S.E.N.S. RECORDS, aswell as guest appearances on Afrika Bambaataa's latest albums, "EVERYDAY PEOPLE", and the the new dance album for TOMMYBOY RECORDS entitled "DARK MATTER MOVING AT THE SPEED OF LIGHT." Look out for the solo CD entitled "ROCKING ON YOUR RADIO." Rounding off his talents, the literary Alien Ness is completing his autobiography, taking the reader on a journey through the mind of a true school b-boy, on the heals of In short, Alien Ness can be summed up in just a few words…   "When (Alien Ness) came out, the game changed!" Mr. Wiggles Rock Steady Crew Electgric Boogaloos 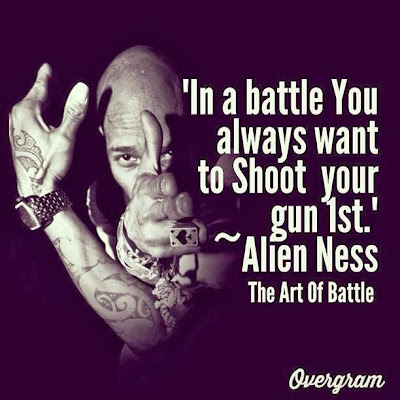 Y'all know what time it is. The first true bboy book written by a bboy, for bboys, about the most important element while being a bboy. Now in its 4th printing.
Get yours now at...
www.ArtOfBattle.com
Posted by SOLO138 at 2:06 AM
Email ThisBlogThis!Share to TwitterShare to FacebookShare to Pinterest