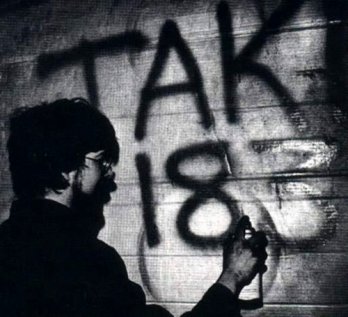 TAKI 183 started writing in 1969 in the Upper West Side of Manhattan.  His "tag" was short for Demetaki, a Greek alternative for his birth-name Demetrius, and the number 183 came from his address on 183rd Street in Washington Heights.
He was first inspired by an earlier writer, JULIO 204 who tagged on the streets were he lived.  TAKI 183 took to the idea of placing the street number where he lived at the end of his tag from JULIO 204.  JULIO 204 could not write outside his neighborhood, due to him being in a gang.  On July 21, 1971, The New York Times ran an article about him on the front page of its inside section, titled "Taki 183" Spawns Pen Pals.
TAKI 183 was one of the first to take his name All-City hitting every thing in site; mailboxes, hallways, train stations, buses, inside and outside of subway cars.  He took on few partners like GREG 69 & 70 and GERMEN, but would also go on his own being that he was a messenger.   TAKI was last known to be the owner of a foreign car repair shop. In an interview with the New York Daily News of April 9, 1989, he talked about his retirement as a graffiti vandal: "As soon as I got into something more productive in my life, I stopped. Eventually I got into business, got married, bought a house, had a kid. Didn't buy a station wagon, but I grew up, you could say that." 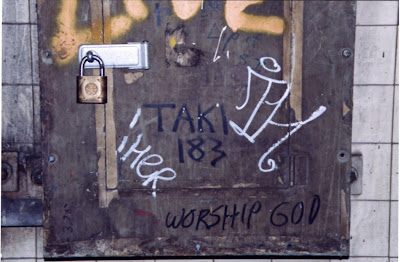 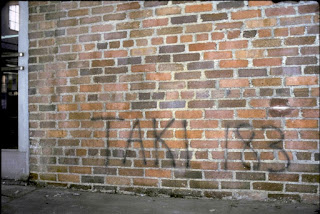 Posted by SOLO138 at 11:50 PM
Email ThisBlogThis!Share to TwitterShare to FacebookShare to Pinterest